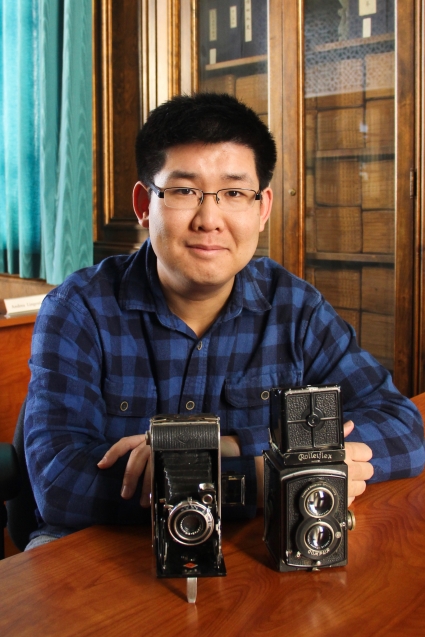 I am a historian of modern Chinese and global history, and completed my PhD in the Department of History at the University of Michigan. I am currently Assistant Professor of History and Associate Director of the Prentiss M. Brown Honors Program at Albion College in Michigan. I am also a Center Associate at the University of Michigan’s Lieberthal-Rogel Center for Chinese Studies and Director of the China Christianity Studies Group, a scholarly society affiliated with the Association for Asian Studies.

I am deeply interested in the multifaceted roles of vernacular photography and filmmaking in shaping cultural experiences. I explore the ways in which people visualize the world around them, looking at the camera and visual materials in framing historical realities, perceptions, and imaginations. The click of a shutter, the contents of a photograph, the turning of an album page, the chattering of a home projector – these are the elements woven into the fabric of my studies.

My current research results from my longtime fascination with the histories and technologies of photography in East Asia and the United States – an interest sparked by family photographs and vivid stories about 20th century China and Taiwan that I encountered while growing up. This, combined with a deep interest in reading, writing, and teaching history, led me to undergraduate studies in East Asian History at the University of California, San Diego and my doctoral work at the University of Michigan.

My monograph, Developing Mission: Photography, Filmmaking, and American Missionaries in Modern China is now in production with Cornell University Press, and will join the United States in the World series with a scheduled Fall 2021 release. Developing Mission is a transnational cultural history that reconstructs the lives and afterlives of images, cameras, and visual imaginations across the American missionary enterprise in China. It illuminates the centrality of visual practices in modern missionary experiences and representations, even as changing Sino-US relations radically transformed the lives of those behind and in front of the lens.

A book edited by me and Charles Bright (History Emeritus, University of Michigan), War and Occupation in China: The Letters of an American Missionary from Hangzhou, 1937-1938, was published in 2017 by Rowman & Littlefield and Lehigh University Press – part of the Studies in Christianity in China series. A chapter on American Presbyterian photography and filmmaking in interwar North China appears in China’s Christianity: From Missionary to Indigenous Church, edited by Anthony E. Clark (History, Whitworth University) and published by Brill in 2017. I have also published articles based on my research in the UCLA Historical Journal, U.S. Catholic Historian, Dissertation Reviews, the Wittenberg University East Asian Studies Journal, and Education About Asia.

I enjoy combining my academic studies with personal interests. I actively seek to identify – and when possible, collect, restore, and regularly demonstrate – historical photographic equipment that produced the images that I study and teach. The two cameras in my profile photo, for example, are closely linked to prewar China, the United States, and their global connections. The one on the left is an Agfa folding camera that was purchased by an American Presbyterian missionary family en route from Europe to China in 1937. The one on the right is a rare 1933 Rolleiflex Old Standard twin-lens-reflex built specifically for the Chinese market, as part of Sino-German cooperation during the Nanjing Decade. Its focusing knob is factory-stamped “德國製 – Deutsches Fabrikat.” What stories these cameras would tell, if they could speak!

I am an avid photographer and use both digital and film-based media in my personal, professional, and research imaging.